Where Do Songs Come From?

There are 2 basic components to creating a song. The first is what I call organizational creativity and involves using your brain to manage ideas, chord structure, and a storyline that makes sense. The other main component of songwriting is Intuitive Creativity and involves tapping into higher consciousness.

Most artists will claim they have poor organizational skills. Writing a song is like telling a joke. If you don’t say it in the right order or mess up the punchline it doesn’t work. Some songwriters start with words while others start with a chord progression or melody line. Typically minor keys are sadder and major keys are brighter. Rhythm is also another important component of painting the audio landscape. Subject matter can influence a song too. Each has it’s own mood and should be represented appropriately or the song won’t feel right. It all makes the difference between noise and song.

Meditation is easier than you think. Just sit (or lay still) for 15 minutes, breath deep, and try not to let your monkey mind run all over the place. Praying is asking The Great Cosmic Whatever for what you want. Mediation is listening for the response.

Did you hear anything? Ya, me neither. Sometimes songs take years to write. Many times I get an idea for a song that incubates for a couple years. Then when the time is right, or I find the time, it sprouts. Like a seed in the right soil, with enough water, and when warmed by the sunlight, comes to life.

The first song on my new album came to be with the help of both organizational and Intuitive Creativity. I was setting up for a gig at the Acoustic Cafe in Eau Claire, WI when the chorus just hit me! I just started singing it, “If you want it you can have it come and get it…” The first thing I did was write it down so I wouldn’t forget it. I always keep a notebook nearby. The next day I was listening to my favorite evolutionary astrology report on the radio. The report was reiterating the same concept as the chorus that came to me the night before. I wrote down all the main ideas and then organized them into verses so that they rhymed and made sense and voila, I had a song. The main idea, the chorus, was backed up with supporting ideas from the verse. This was the fastest I have ever written a song.

Track 2 on the new album is called South for the Winter. I hadn’t written a song in 11 months. I took some time off from touring and forced myself to spend some time writing. I wrote one song a day for seven days in a row. Out of those seven songs I had two that I was happy with. All the others I put away to work on later or take pieces that work to make yet another song. South for the Winter is a song that I had been wanting to write for many years. I sat down with a Field Guide to North American Birds and wrote down a bunch of terms and phrases describing birds. I anthropomorphized the bird and created a character and a song was hatched.

Black-eyed Susan is a song I wrote while sitting outside of Powell’s Bookstore in Portland, OR. I had a cousin who was trying to escape her life by hooking up with a man she met online. I empathized with her feeling of needing to run away from a dissatisfying life. When writing a song you need to be careful to make sure that what you are saying is what people are hearing. In this song I sing, “Black-eyed Susan couldn’t sew up her holes, a patchy bird, a Dark-eyed Junco”. What most people unintentionally hear is, “Black-eyed Susan couldn’t sew up her holes, Apache Bird, a Dark-eyed Junco. I was trying to describe someone who had a lot of patches on her clothes and ended up making the main character of the song a Native American. By the way, a Black-eyed Susan is a flower and a Dark-eyed Junco is a species of bird.

I wrote the song Caravan as an effort to express my longing for the freedom I felt when exploring public lands like National Forests and Parks. Public land is more prevalent in the Western States and becomes less and less the further East you go. I had just moved back from Washington State to Wisconsin and was having a hard time finding free places in nature to hang out in. Gypsies, Hobos, Boats, and Hippies are all things that represent a lifestyle of a roamer and wanderer. I wanted the song to have a Django Reinhardt feel to it.

Ray O’ Sunshine is a Love song plain and simple. I have known my wife for 20 years and had written Love songs for her before. I was running out of fresh ideas. I was going through old journals, songs, and junk drawers looking for inspiration when I found a love letter I had written to her when we first met. It was titled 22 Things I Love About You. I did some finagling and turned it into a song.

As an ordained reverend I have officiated over 30 weddings. I basically just followed the advice, “write what you know about”. Do I know about weddings? I Do.

I was 31 years old before I got my first “real job”. I had my first kid and the pressure to be responsible was overwhelming. One month after I started hanging out in my cubicle I wrote the first line to the song Dig a Hole, "I work too much but I ain’t go no money… " The job lasted a year and I’m back at it trying to live a life that feels authentic to my being.

Spiders in the Window is a song with a lot of tension and turmoil. It is in a minor key. After I left the corporate cubicle world I tried out organic farming. I quickly learned that being a farmer and being a musician are about as opposite lifestyle as you can get. A farmer is tied to land. A musician roams. The two lifestyles were incompatible. Again, what I thought I wanted was not actually what I wanted and I had to learn the hard way. “When you want it so bad that you can’t be happy without it, then you get it, you don’t want it, you don’t even care about it”.

The song The River Knows the Route is actually about a creek. I was sitting creekside watching the Autumn leaves flow by and noticed some would follow the current and others would get stuck in the Eddy. This song is a long and indirect way of saying, “Go with the flow”.

Grateful 4 is a song about things I am grateful for. I had been hearing a lot about the power of gratitude and how to get what you want in life you need to be grateful for what you have and more of it will come your way. This song has been featured multiple times on Wisconsin Public Radio show Simply Folk. The only other time I was on a nationally syndicated radio show was when I called in to Car Talk to find out what was wrong with my 1984 Chevy Vandura Country Cruiser.

The last song on the album is called Wallowa Mountains. This mountain range is in Oregon south of the city of Walla Walla Washington. It’s a love song about a beautiful landscape. It works in a song because it is fun to say.

All these songs came together to tell the story of the Heroes Journey, which is a common template used in story telling. Basically, a hero ventures forth from the world of common day into a region of supernatural wonder: fabulous forces are encountered and a decisive victory is won: the hero comes back from this mysterious adventure with the power to bestow blessings on his fellow man. Tie it all together with the bird concept/theme and you have the new album, Songbird.

4. Caravan (Seek Truth in a world of friends and foes)

8. Spiders in the Window (Blown off course)

9. The River Knows the Route (The path home is shown)

10. Grateful 432 (transformation and the power of gratitude)

11. Wallowa Mountains (happily ever after)

Want to Write a Song? Try this out:

First, sit quietly and comfortably for 15 minutes. Try not to think about anything. Focus on your breath going in and out of your body.

Next, take a main idea, concept, or line for a song (one-liners are pretty easy to come up with) and write it down in the middle of a blank page. All around it brainstorm any or all supporting ideas you can think of. There are no bad or wrong ideas at this point. Once you have as many supporting ideas or words as you can think of, grab your thesaurus and rhyming dictionary and organize those ideas into the skeleton of a song. Set it to a fitting chord progression or beat. Scratch and scribble. Don’t be afraid to edit. 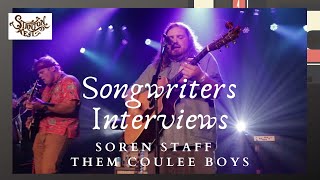